i have finished watching tbbt until latest season 5.
arghhhh!! u know those feeling when u have finished the whole seasons of a tv series?
u felt lost! as if there is nothing else u can do anymore.
other things seems boring, and monotonuos.
god!
over sangat!

*i paused abit at episode 23 (season 5 got 24 episodes) because i wanted to save the best for the last, tapi taktahan! and so i watched. and ta-da, arghhhhhh again!

leonard (tbbt main char) is a lactose-intolerant that when he accidentally eat/drink milk, he'll have bloated/windy stomach and after 30minutes or less he'll start pouring gases a.k.a farting.

now that i think of it, i am always having problem with the wind problem.
but mostly not fart, big sendawa. especially if being massaged.
masalah angin.
and when i think much deeper, yea that, the problem mostly arose after i drink alot of milk.

or am i sinking so much into this tv serie?

leonard: Is there a history of heart disease in your family?

howard: My family is the history of heart disease.

currently listening to:
katy perry - part of me currently feeling:sad and full too
i wanna be:kurussssssssss
VideL ranted on Friday, July 20, 2012 No comments:

Sent from my iPhone
VideL ranted on Tuesday, July 17, 2012 No comments:

*by barenaked ladies*
* Our whole universe was in a hot, dense state *
* Then nearly 14 billion years ago expansion started... Wait! *
* The Earth began to cool *
* The autotrophs began to drool, Neanderthals developed tools *
* We built the Wall * *We built the pyramids *
* Math, Science, History, unraveling the mystery *
* That all started with a big bang *

"Since the dawn of man" is really not that long,
As every galaxy was formed in less time than it takes to sing this song.
A fraction of a second and the elements were made.
The bipeds stood up straight,
The dinosaurs all met their fate,
They tried to leap but they were late
And they all died (they froze their asses off)
The oceans and Pangea
See ya wouldn't wanna be ya
Set in motion by the same big bang!

It all started with the big BANG!

It's expanding ever outward but one day
It will pause and start to go the other way.
Collapsing ever inward, we won't be here, it won't be heard
Our best and brightest figure that it'll make an even bigger bang!

Australopithecus would really have been sick of us
Debating how we're here, they're catching deer (we're catching viruses)
Religion or astronomy (Descartes or Deuteronomy)
It all started with the big bang!

Sent from my iPhone
VideL ranted on Friday, July 13, 2012 No comments:

==copypasted from the link above==

7 movies that ruined our perception of relationships:

'The Notebook' has given women such high and unrealistic expectations of men that they will undoubtedly be let down in real life. Ryan Gosling's character Noah spends years performing grand gestures of love to win over his sweetheart Ali.
His over-the-top antics include:
•Writing letters every single day
•Building a dream home for Ali
•Dramatic kisses in the pouring rain

2)The Hunger Games
Even though their early interaction was limited to tossing Katniss a burnt loaf of bread, Peeta shows females that guys should do anything to get the girl. This includes the possibility of giving your life for someone in the death battle known as 'The Hunger Games.'

Adam Sandler has gone through countless movies using wit, charm and a lot of immaturity to unrealistically hook up with co-stars like Jennifer Aniston, Salma Hayek, Jessica Biel, Katie Holmes, Drew Barrymore and Kate Beckinsale. He constantly gives average men false hope that using silly voices and goofing off is the key to getting a girl out of your league.

4)Grease
'You're the One that I Want' may be the theme-song of 'Grease', but the only thing that viewers see is Sandy changing completely to get the one she wants. She changes from a likeable, clean-dressed girl to a cigarette smoking, leather-wearing rebel. No matter how catchy the songs are, women should never follow Sandy's actions to please a man

6)Pretty Woman
Where do you begin with a movie that presents a hooker with a heart of gold? Not only has this movie given false hope for woman looking to move up in society, but it presents an unrealistic view into the world of prostitution as a whole. I suggest watching Charlize Theron in 'Monster' to help level out the playing field.

7)Titanic
Any expectations of a three-day whirlwind love affair should have sunk with the ship while watching 'Titanic.' Not only did Rose fall in love, but she spent the rest of her life living out every fantasy that Jack presented her. In reality, money issues would have caused a major rift between the couple if the ship ever landed in the United States.
VideL ranted on Wednesday, July 11, 2012 No comments:

This is the exact song that i think of when i first heard jason mraz-i wont give up last 3 weeks.
I know now that they are both arent exact, but seriously jason mraz's remind me of it..


Case Study : Property in Kota D4mansara. Puchong. Desa Park city. Why the people who bought are laughing their way to the bank?

for me, i think, gold buying is old. property are the new gold. (or land)
but taken from a greedy point of view like me, we must buy something near, very near, to KL..
i have 1 place in mind, segambut, now..

i know places like cyberjaya and putrajaya are developing and good for money too, but, those will take time, i am very greedy and i am not that patient. i think.

Sent from my iPhone
VideL ranted on Thursday, July 05, 2012 No comments:

++the one with the wedding date

zomg i found my old entry (dated august 2006) while searching back the korean movie i wanna dlod back and watch..

http://videlkuchiki.blogspot.com/2006/08/wedding-date.html#links
and i recap:
my frens are crazy :D
laswik, while helping a good fren from my school finishing her wedding-invitation-cards, we talked about siti nurhaliza getting married and stuffs.
then, we talked about our future. her wedding will be on 9th september 2006 [9-9-06], bersempena her betday, same date, coincidently, which falls on saturday. i then told her, lucky you, you can have a dabel parteyyy on your betdey-date later later. and now she urges me, why not you get married on your birthday-date?
menarek. together, we all browse thru the calender, searching for my birthday, which will falls into saturday or sunday. jeng jeng jeng.
31st december jatuh kepada: the nearest is this year! [and lastyear].
and the next nearest is on 2012!!! ok this year wont hepen lah kan, too soon to find a husband, tapik, 2012 adelah berumor berape tuhhhhhhhhhhhhhhhhhhhh?????
ho ho ho. perbincangan harus ditamatkan. saye ialah sedih lah. 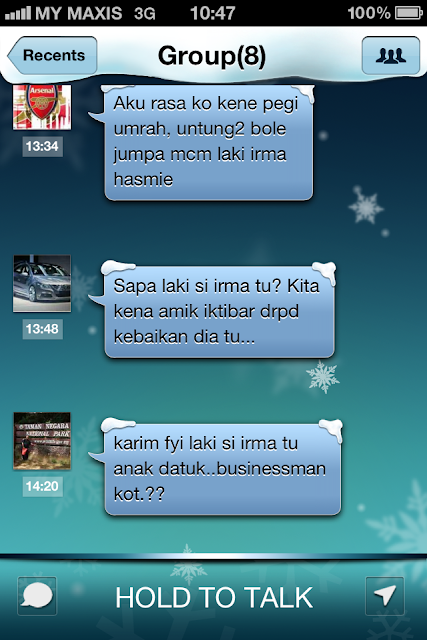