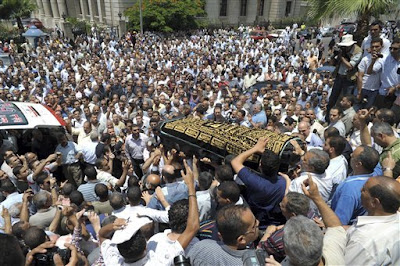 1st of all read this news:
http://www.google.com/hostednews/ap/article/ALeqM5j5hAwHTYyudXwuL-hFiLsNKbyNKAD9994MIO0
a mother, was being KILLED by an extremist (anti-muslim extremist) in the courtroom in germany.
she was being stabbed 18 times there, infront of his 3-year old son.
her husband, who was trying to intervene was also being stabbed by that attacker and then was being accidentaly shot by the security guard, because that stupid security guard thought he is the criminal sbb he is not BLOND. fnck sungguh!
"The guards thought that as long as he wasn't blond, he must be the attacker so they shot him," al-Sherbini told an Egyptian television station.-source, from the news article.

for this, ejaaaaaa, i wish all the pray i could have, safety to be in your hands n family, and our beloved aq1dd.

kadang2 aku rase nak marah dgn terrorist2 yg start the fight against whoever people that later on became an-anti-muslim terrorist.
lookit what u've done, u made the other muslim looks terrorist and u build some strange fear inside us.
but then again, who actually triggered them terrorist at first?
and i was being told that the 11/9 tragedy was not a muslim-terrorist act. it was actually being planned and activated by the jews. hence many jews didnt turn up to work on that day. go figure.